Earlier this week, I had a bad day. I had two cars that I couldn’t drive, my bike had a flat, my iphone was in pieces, the power supply for my laptop was working sporadically (ended up buying a new one) and I was dreading doing my taxes. Today is much, much better.

Yesterday, I tried giving one of my cars a jump and it still wouldn’t start. I went to a garage and a very nice guy came back to my place with me to jump the car, in case I had done it wrong. I hadn’t, so they called a tow truck for me and pulled it in.

My iPhone 4s had a cracked screen from when I slipped while jogging. I bought a replacement screen and took it all apart, only to realize that I bought an iphone4 screen and not an iphone4s screen. The iphone4s screen arrived yesterday and after taking care of the car, I started working on it. As I was trying to connect one of the ribbon wire connectors, I pulled a bit too hard and yanked it right off. $95 out the window! To say I was upset with myself is an understatement. I was debating whether to abandon iphones altogether, buy another one or just buy another screen.

I have found that once I decide that something is junk and things don’t matter anymore, that I often make my best progress. I was looking at the original iphone4 screen that I bought and saw that it had all the same connectors as the iphone4s. The only difference I could see was that the mounting holes were in different places. But three of them were the same. Since I had already decided that it was all junk now, I decided to just crack off the connecting pieces that didn’t line up. And then I hooked the iphone4 screen up to my iphone4s. Had I been a little more careful, I probably could have clipped the wrong bits off more cleanly, instead of the just twisting and cracking the bits. But, aside from that, the screen worked perfectly. And now, just because I can, I have one of the few iphones with a white front, black button and black back. 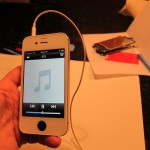 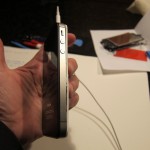 So, it doesn’t look perfect, but it works fine. More importantly, now that I’ve disassembled it once, it’ll be easy for me to do it again. If I need a new battery, no problem. If I break the screen again, I’ll replace it with the correct iphone4s one. Having Apple repair it would have been $150. For $170, I repaired it and more importantly, also have the tools I’ll need for future repairs, the knowledge of how to do it and an iphone that doesn’t look like anyone else’s. To me, worth way more than $20. I was calling and texting all sorts of people last night, riding the high of fixing this.

Today, I decided to take a mental health day. I didn’t think I’d be that busy at work, so I thought it’d be more productive for me to stay home. So I relaxed in the morning still enjoying the success from the night before. I then did a little work because it was easy to do without any interruptions. Since I got paid yesterday, I took care of all my bills, went shopping to pick up some necessities and took a picture of the finished tile job at my house. I think it turned out really well. 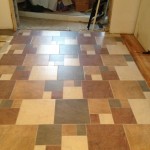 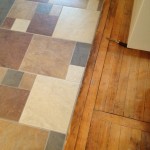 I haven’t yet cleaned the wood floor, but there are some scratches in the finish, so I’ll fix that all later.

After picking up my newly-repaired car…starter motor, $270 which is less than I thought it would cost, I decided that I should just do my taxes. I don’t know why I had been dreading it so much this year. I usually like to do them and see how my year went. Anyway, I just opened up Turbo Tax and pushed through. I ended up really happy because I’m getting back a lot more than I thought. Then, I filed my Illinois taxes and got that out of the way as well.

The last bit that needed to be fixed was the flat on my bike. I had bought a new tube when I went to the store and put it on just now. It’s filled with air and ready to be ridden.

I have to say that if I were always this productive on days off, I would get so much more done. But compared to earlier in the week when I was in such a lousy mood, today is almost the exact opposite. I really like fixing things that are broken, instead of replacing them. Now, I’m finishing off the day by washing clothes and relaxing by reading a book. It’s really been a great day!