As is quickly becoming a tradition for me, I took a long bike ride on Labor Day. I biked down to my Mom’s house with my brother Paul. We stuck around for a barbeque and then biked back in the early afternoon. The only bad part was Paul got a flat about five or six miles from our house. Aside from that, they were pretty good rides.

One think I did learn from these rides is that I probably should change my birthday plans. Stopping for lunch after 40 miles of biking is going to be a smelly affair and I probably shouldn’t make people hang out with me at that point. After biking to my Mom’s, Paul took a quick shower, but I just changed clothes. I felt pretty slimy most of the time and I don’t want to feel like that on my birthday. So perhaps, I’ll just try to do the whole ride and then stop, shower and change. Or maybe I’ll come up with something else entirely. I have to think about it.

The route we took. 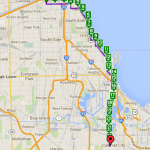