Now that it’s 2018, it’s time to start preparing for my 2018 garden. The last two years, I’ve had plenty of success with tomatoes and peppers. Last year, I also got a ton of beans and some great flowers that took no work. I also got some spinach and lettuce. And I got a single pumpkin, watermelon, cucumber and two zucchini. That has pretty much hooked me on gardening. Aside from the food, which is fun. I found it incredibly relaxing to come home after work and pick tomatoes or flowers in the garden. So I want to keep it up.

It’s January 7th, so here is how my backyard garden looks right now. 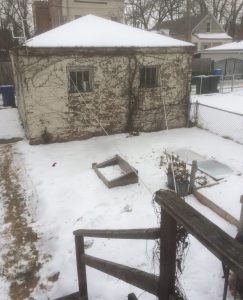 First thing is that I made those sort-of raised beds with wood I found in my basement. The only money I spent there was buying 12 bags of dirt (for $1.50 each) and one bag of mushroom compost for a few dollars. I also spent around $20 on seeds. Since I feel that I’m now getting serious about gardening, I think I could spend a little more money. I want to build up some nicer raised beds. My idea is to build three rectangular raised beds. Perhaps 3′ wide by 8-10′ long. I want to build them out of cedar, so it will depend on how expensive that is. I’m reading a book called the Vegetable Gardener’s Bible that says wide and deep beds are the way to go. So I think I want them to be at least 12″ tall. Again, it will depend on how expensive the wood is.

Another plan is that I’d like to orient these beds so that I could possibly enclose them in plastic to make an actual greenhouse for next winter. The cold frames that I’m using now still freeze. Since I’m in zone 6a, I need to be prepared for temperatures down to -10F. A box with a window on top isn’t going to do it. But if I put that box with a window on top inside of a plastic hoop house, that might keep the plants above freezing. Another option is to put a compost pile inside the greenhouse to get some natural heat. It seems like this might work and it’s crazy enough that I’d like to give it a try.

Anyway, nothing is going to happen in the backyard while it’s covered with snow. My January duties involve starting some seeds. Last year, I bought a set of shelves, a cheap led worklight and a timer. It worked fine for starting seeds. 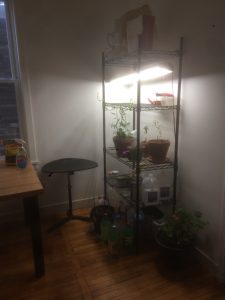 I’ve read that celery and onions take a long time to get started. So my goal this month is go start some of those seeds so that they’ll be ready to go in the garden later.